A Moment Of Silence

It's a very sad day at the Three Woofs Household ... we have lost an important and valuable member of our pack. None of us can believe it. It's heartbreaking, and has left a gaping chasm of grief in our collective souls.

Yes, I know, I can't believe it either. It seems like just yesterday "Fifa" was bumping merrily along in the back of my Montana, spilling out the side door and bouncing to the beach along with its four furry friends, and sidekicks "Chuck-It" and hockey balls. Probably because it was only yesterday! We took the afternoon off and made our way to the dog beach under the Burrard Street Bridge (mistake #1 - should have driven the extra 5 minutes to Kits beach). 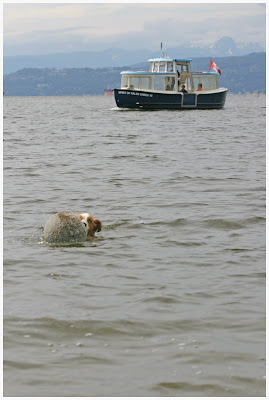 The tide was coming in ... so the beach was small and there was quite a few dogs there, all of whom wanted to jump on Red Dog as he emerged from the water with his hockey ball. Those of you who know RD know this is a Very Bad Situation, so we moved to the far end of the teeny beach, near the bridge pilings. (mistake #2 - the tide rolls in at a northeastern angle, straight for the bridge pilings)

We were having a merry old time; Woo was showing off his extraordinary ball handling skills to the delight of onlookers. It was like old times! Woo was in love with "Fifa" again. It warmed the cockles of my heart, wherever and whatever those may be. 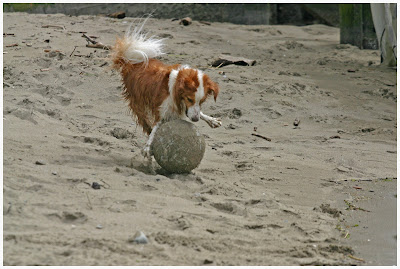 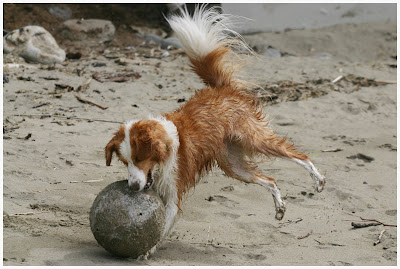 Even "Fifa" was feeling its oats and was inflated with self importance, making Woo struggle to contain it. The combination of the pull of the tide and "Fifa's" playful demeanor made it a challenge, as "Fifa" kept trying to escape in gaps in the bridge pilings ... 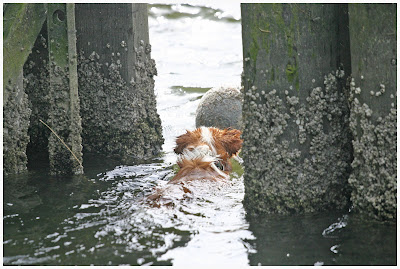 ... but Woo was determined, and up to the challenge 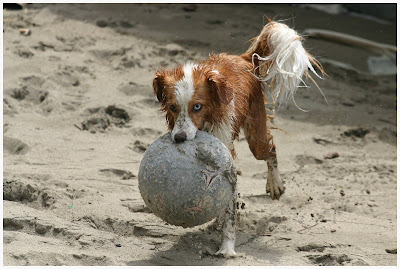 And then tragedy struck. "Fifa" floated underneath the bridge pilings while Woo was momentarily distracted by some picnickers on the far side of the beach (here's a question - with miles and miles of mostly empty beach, who comes to the smallest beach in the world, designated for dogs, without their own dog, and sits down with their two kids to eat lunch?? WTF?) Naturally, he had to go investigate, and foolishly trusted in "Fifa" to stay put until the game resumed. This was mistake #3. I would give anything to go back in time and explain to Woo that a good sport does not abandon the game in mid play. If only I were a better coach! I blame myself for this lack of foresight. 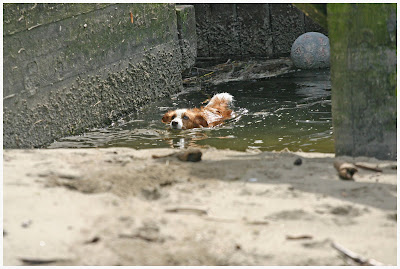 And in the blink of an eye, "Fifa" twirled and floated itself into a gap between posts and wood, just large enough for itself. And there, "Fifa" remains, lost, frightened and alone. I don't mean to be disrespectful to the departed, but I hope this time gives "Fifa" a chance to reflect on the error of its ways.

I would have saved "Fifa" if I could, but the water was up to my chest and I was not about to wade in their clad in jeans and a sweatshirt. (Where is Adrian in his ridiculous shorts and thongs when you need him?) 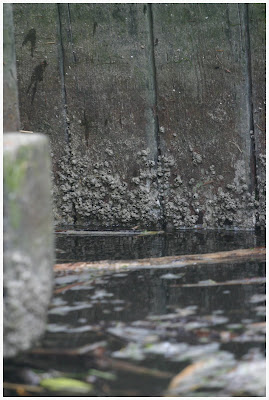 I'll never forget "Fifa's" power to woo The Woo, or its gritty, slightly deflated personality, or its ability to taunt Woo from its ocean cradle. I still remember the day Woo discovered "Fifa"abandoned by a dumpster on our way home from the park ... the look of glee and hope in his eyes was too much to ignore; of course we had to make "Fifa" a member of our family, and offer it shelter and love. You were a good friend to us all, "Fifa." 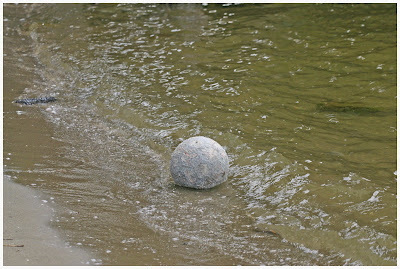 Woo was, of course, devastated. But he chose to express his pain and torment with some misdirected rage. After barkscreaming for a bit in the general direction of "Fifa's" last known sighting, he then borrowed Mad Teeth (tm) and used them on the puppy Tilly. 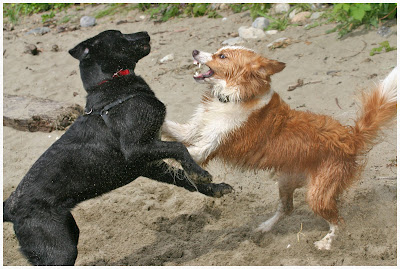 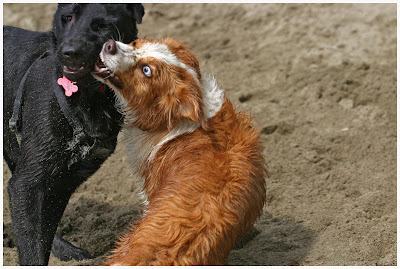 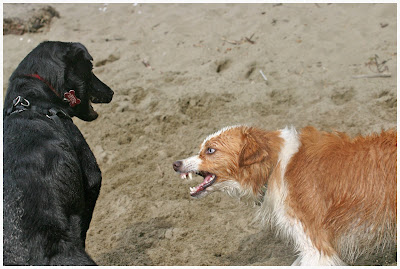 He tried to console himself with a little Piper-Raiding, but even I could see his heart wasn't really in it. Or maybe he hadn't give Mad Teeth (tm) back to Piper yet. Or maybe she felt sorry for him and his loss. Either way, she responded with nothing but a blank stare to his half-hearted overtures. 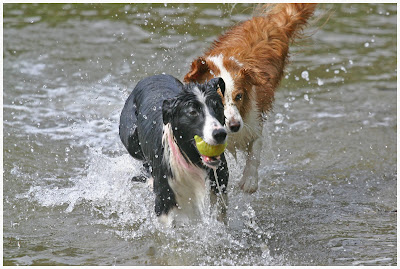 Fortunately, Woo has pretty good bounce-back and by the end of the afternoon, he was resigned to the new, "Fifa"-less reality of life, and amused himself by fighting with a large Wootie-Stick. 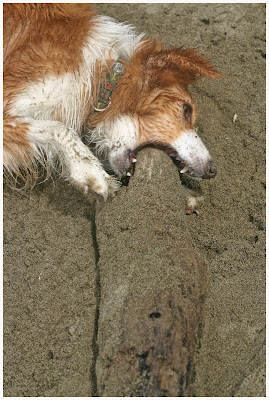 I don't think the Three Woofs really knew what had happened until we got home and the conspicuous absence of "Fifa" was detectable. I admit, I feel judged by them for my shortcomings and my failure to protect "Fifa" and their little brother, Woo. 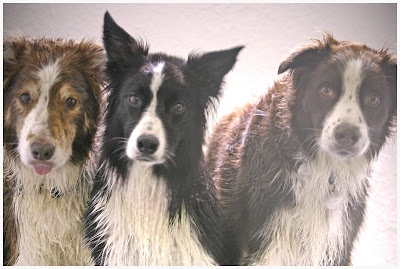 Piper was especially disappointed in me. 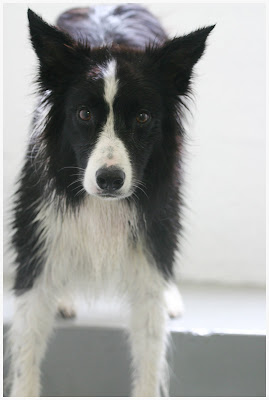 But it was Red Dog's unwavering look of both incredulousness and grave disgust was much, much worse. 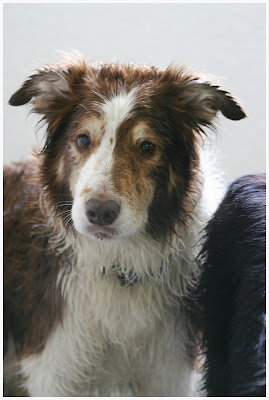 Posted by The Border Collies at 9:06 AM

how can we have a football team when fifa is not around?

We can't exist without fifa!!

he will be missed!

p/s i love the picture of three woofs. beautiful!

RIP, Fifa. We used to have a Fifa but a foster dog (I'm not naming any names, but it might have rhymed with "pantsy") punctured it and left it for dead. It was only mourned by Willow, who is incapable of mourning for more than...like...a millisecond. We remain without a partially-inflated soccer ball. We do, however, have "squashy basketball" which Tilley defends from others with her life.